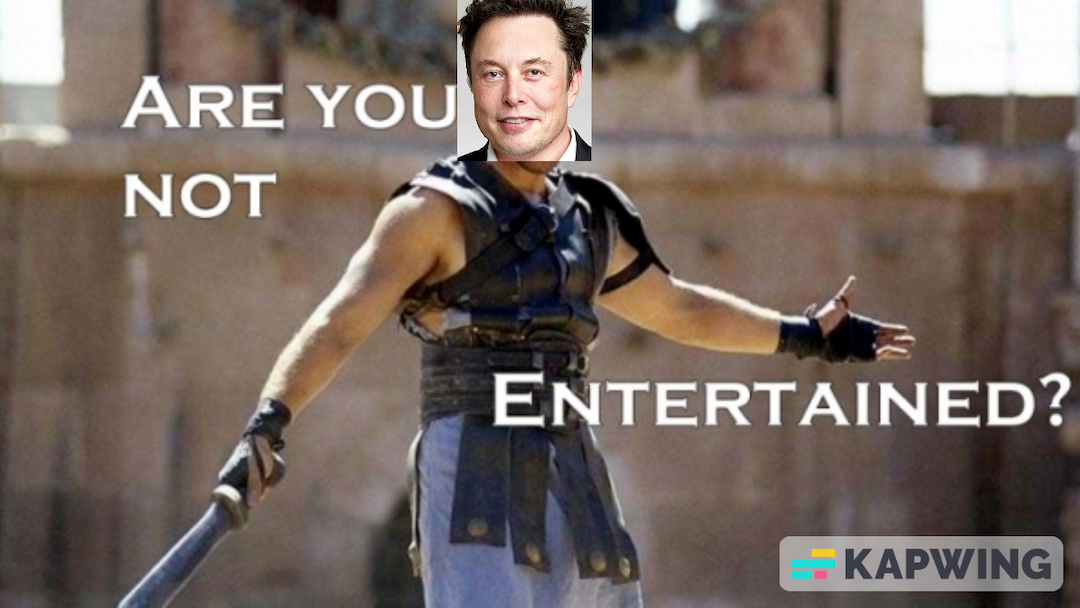 Are you not entertained? Is that not why you are here?

It’s been a wild week in Twitter land, as Elon has grabbed the controls of the plane not with the detached cool of Han Solo, but something more like the wild-eyed, manic smile of Cyrus the Virus in Con Air. Public opinion on Elon’s takeover is polarized – Elon is either the purifying power washing that Twitter needed, or a monster who’s abusing employees and callously sabotaging the most important platform for real-time news in the world.

Stay SaaSy is about management and strategy, so we aren’t trying to dive into the politics of the situation. Instead, we’re here to offer some thoughts on why some of what Elon is doing might make sense – and also why some of his moves really are as crazy as they look.

The playbook that Musk is running looks (and is) brutal, but in isolation many of the moves are not crazy and in some cases even expected. Executives almost always take a few steps when they start a new job:

This is the playbook. It isn’t always pretty but it is pretty consistent, including across industries (sports teams operate similarly). If you squint, you can see Elon running it, and accelerating the transition as much as he can because he apparently believes that things were terrible before him. Since he’s speed-running, steps that would usually take 4 quarters are getting done in 4 days.

Speed-running sounds cool but is not always a virtue; if you speed-run a relationship and say you love your Tinder match on your first date, you will potentially cause a major scene at Olive Garden. On the other hand, maybe speed-running is necessary if you’re burning a reputed $4m per day (and don’t care what anyone else thinks). The steps that Elon is taking, timing aside, are not totally crazy – especially if the rumors are true around Twitter’s losses and debt servicing needs.

Elon clearly intended from the start to layoff huge swaths of Twitter, ostensibly because Twitter didn’t need that many employees. I don’t have much firsthand knowledge here, so I’ll instead write about what I can observe. It goes without saying that layoffs are incredibly unfortunate, particularly in an economic downturn.

Twitter had a large technical staff, but Twitter’s product hasn’t evolved much in a long time. During the last (say) 5-8 years, other popular products have evolved a great deal:

It clearly isn’t impossible to do stuff, and some of these companies (notably Datadog and Cloudflare) actually had significantly smaller engineering teams. So just off of strict napkin math, “Twitter = cushy” doesn’t seem immediately wrong.

The apparent lack of product evolution is significant because Twitter pays (paid?) close to top of market for tech, and top of market is a LOT. $600k+ for a Staff Engineer. A million dollars or more in total annual compensation for a Director+. Other companies pay that too, but other companies also ship a lot.

I have no first-hand evidence of the median employee experience at Twitter. But in tech circles, if you said that Twitter was a cushy job, nobody was exactly leaping to their defense. It’s worth noting that this is very much not true about many other big tech companies (Uber, Meta, Amazon, Netflix all come to mind).

So it isn’t really that wild an argument to say that Twitter was overstaffed. Arguably very overstaffed – and that’s probably how Elon has been thinking about it.

Twitter may not have shipped much, but nobody can deny that it is truly an impressively high-scale product. The biggest difference between low-scale and high-scale applications is that high-scale applications have a tendency to spontaneously detonate for no predictable reason. Knowing nothing but its approximate MAU, I can tell you that Twitter is going to be that kinda dude.

Low-scale products – let’s say something like Carta – are like trains. If they break, they’ll typically roll safely to a stop so that you can figure out what went wrong. They aren’t trivial to fix but they can handle setbacks reasonably well.

High-scale products are like helicopters. They require constant preventive maintenance, when things go wrong they tend to whip around and disintegrate even faster (meaning that even tiny faults can cascade poorly), and we make you go to school before we let you fly one. Companies with high-scale products have armies of battle-scarred, paranoid protectors with arcane knowledge of the operating characteristics of scary-sounding technologies like Apache Kafka and ScyllaDB, and they’re the last line of defense against the chaos of massive outages.

So one of the worst things you can do while you’re flying a helicopter is fire the pilots and see if someone in the back knows how to pilot it solo… which is a massive problem with Elon’s plan. He might have correctly calculated the number of people that he could technically layoff, but did he get the right ones? I know that we only need 2 people to fly a 12 person helicopter, but it’s pretty important that we pick exactly the right ones.

We’ll get to find out in the coming weeks whether Elon inadvertently booted all of the pilots, or whether he’s pulling an M. Night Shyamalan and it turns out that he’s already secured the people who’ll keep Twitter running.

While not necessarily a diagonal dispute, every disagreement between a CEO and their team shares these traits.

So if you’re a manager, here’s the rule I follow. If I’m the senior person, I have to meet the other side ⅔ of the way there, NOT halfway. That means they get to be twice as blunt as me, twice as frustrated, twice as unreasonable, twice as rude. I ask senior members of my team to do the same. It’s honestly the absolute least one can do as a leader.

Elon, however, is clearly pretty cool with punching down, and I think that it’s cringey and inconsiderate at best, and to his deep detriment at worst. I can’t really imagine any way that this is working to his benefit unless he’s trying to avoid paying people severance by encouraging resignations.

The ROI of Publicly Arguing with Your CEO Is Low

But that said… I’m not quite sure what some of the people who were (reportedly, allegedly) fired for public Twitter or Slack disputes were expecting.

Now let’s say that the coworker is your boss. Whom you haven’t met. Who has a reputation for being a little bit loco. Who desperately needs to save money and is paying you $500k per year.

If you criticize that person in front of the entire world, even if you’re right… what do you think is likely going to happen next? Even if you’re in the right, the method of communication adds significant organizational chaos and is less likely to actually change their mind. Also… what do you think that any future employer is going to think of your judgment, given what you chose to do with the (we must assume) extremely obvious information above? Let’s all be practical here.

This has been one of the craziest weeks in tech news for a long time. The Twitter situation is wild, and since it’s happening semi-publicly, we thought that there was some interesting decision-making to examine. Join us next week for our FTX article when we discuss what we can learn about scaling HR policies from legendary management gurus SBF and Caroline Ellison.